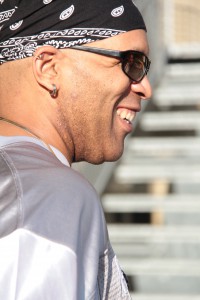 Son of Rev. Ludwell and Evelyn Brown , Lenell was brought up in Northern Virginia. Deeply rooted in the Baptist Church and singing Gospel in the choir. Lenell had a true desire to sing and a deep love for music and the art of SOUND.

Through school he was always active in School Musicals and show choirs. And often seen singing on the school corners. Also known for his accomplishments as a football player and wrestler Lenell knew that his true passion was in singing.

He capped his Senior year off at the Senior Talent show Rocking the audience with Keith Sweats “Spend all day thinking” accompanied by Mark Baily beat boxing. He brought the audience off their feet as he serenaded fellow classmate Paula Hutchins. Once he felt and saw the reaction he had made on the audience it was clear that not only did he love and found joy in singing but it was also possible to transfer those emotions over to the audience.

He was hooked he knew he belonged on stage singing and performing.

Shortly thereafter he interviewed and auditioned for the International Educational and Performing Organization “Up With People”. At that time over 20,000 young people between the ages of 17 and 25 interviewed from all over the world to fill one of the 750 slots and travel in one of the 5 international touring casts .

His life would forever be changed when he opened the mail box and saw a letter from Up With People holding his fate. He nervously but excitedly opened the lettered and shouted with joy and amazement that he had been selected to travel as a cast member on the upcoming tour.

In his first year as a cast member, Lenell travelled to over 200 cities in 7 countries and performed in over 300 live shows. Highlight performances during his cast year included a private show for the Queen Sylvia of Sweden and a live 4th of July performance in Washington D.C. in front of the Washington Monument in front of 500,000 people and a television audience of 4 million.

After his Cast year was complete he was asked to join the staff of Up With People and perform with the special events Cast where he performed up to 5 shows a day for 3 weeks in Kamakura, Japan.

He was a part of the Up With People staff for the following 5 and a half years where he performed in a countless amount of 2 hour and private shows touring through 20 countries and 49 States. Highlight shows include World Youth Day for Pope John Paul II at mile high stadium in Denver Colorado in front of an audience over 90,000 and a private show for then Gov. Roy Romer and President Bill Clinton. Highlight tours include Australia, Japan, and the former Soviet Union.

His work in Switzerland

Now residing in Switzerland he has been steadily working in the music scene singing, writing and recording. With his main passion being R&B, he has not limited himself to just that one style. He also has written and performed a variety of Rock, Blues, House , Lounge, and course Hip Hop productions.

He has written, produced and collaborated with some of Switzerland’s most talented artists.

In 2006 he was featured on the lounge track “Relax” produced by Mahara McKay (Miss Switzerland 2000) that was released internationally in America by the label Webster Hall N.Y.C. Records

He also works extensively as a writer and Studio singer for Ben Mühlethaler Aka “Groove professor” of B-Note Entertainment GmbH. (http://www.b-note.ch , http://www.myspace.com/grooveprofessorone)

He was  a member of Duke and the Sheltics where he is featured on a number of songs. Their CD “ Diary Scraps” was released in Fall of 2009 followed by a tour throughout Switzerland to promote their new CD.

He also is featured on a song titled “Ring the Changes (remix)” on the Single release “HARD DAYS” Featuring Daniela Simmons (http://www.danielasimmons.ch) Which was also released in summer of 2009.

In September 2011 Lenell released a single with Switzerland Rap Star  Steff La Cheffe titled ” So oder So” available for digital download on iTunes.

Since receiving his first Gold Album Award in 2014 for his participation on the  Remady & Manu-L Album ” The Original” events ,new collaborations and exciting new projects have filled his agenda.

With the third single and music video just released off of the Donald-D & Lenell Brown “This Is The Time” project  “Lets Get It On” (Don’t Stop) video directed and produced by Lee Bolton of Elerby Studious located in Manchester,England and along with new House productions by some major players in the House scene , new Sponsorships, new exciting  collaborations Lenell continues to work to bring you quality productions and as he says it often he is “Staying Blessed Up & GRINDIN”.

Please visit his youtube channel to check out his music and videos.

Lenell has Featured , produced or written for the following Artist: